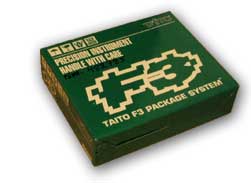 Taito F3 Package System (also known as Cybercore) was/is an arcade game system released by Taito in 1992. Some early games running on F3 hardware were released as standalone PCBs, but most complete F3 kits consist of a motherboard and pluggable game ROM carts, very much like NeoGeo or CPS2.

The problem with F3 system is that both motherboards and game carts are regioned and the regions do not interoperate: for example, you can not run Japanese cart on European motherboard and so on.

Making the modifications is somewhat easy, but you do require some basic tools (feel free to improvise whenever neccessary):

HOW TO DO IT

After you have "clean" connectors, your motherboard will accept a game from any region. But alas, it will run in the original region's language...so we'll fix that next:

Open the cartrige - turn it over and remove all the screws. There is one screw behind a silver taito sticker. If you remove it, you can no longer return the game for Taito to be fixed (that's what the text says on the cartridge), but well...who cares :) 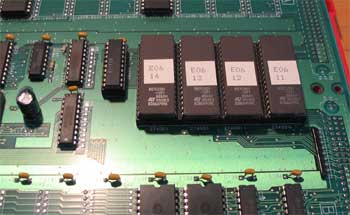 After opening the cart, orient the exposed PCB like the picture right. Then, take out the rightmost eprom on the PCB.

Reprogram the eprom or use a new one, insert it to the PCB, close the cart case and you're done!

Update! When patching Pop'n Pop from Japanese to English, I noticed that its "rightmost rom" does not have the same strucure as other F3 games - in that case I had to reprogram the whole chip, not just one byte. Are there other F3 games like that ... I don't know.