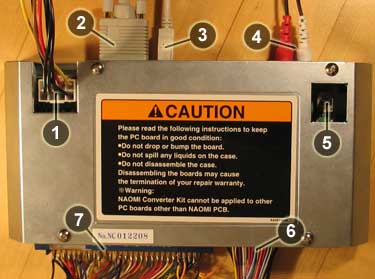 The Capcom Naomi IO-board/converter/adapter allows you to plug a Naomi system into any JAMMA cabinet. While Sega's own IO boards allow you to do the same, Capcom's converter is the best way to do it, because:

The connectors on the Capcom IO are: 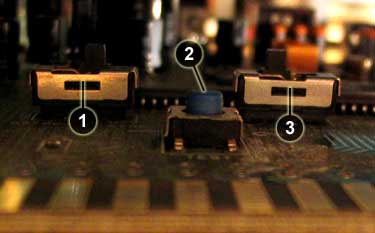 There are two switches and one button located inside the metal case, behind the JAMMA connector:

PINOUTS FOR BOTH MODES

Below you can see a side view of the Capcom IO board. The points of interest here are:

If you need voltage for your extra controllers, pins 32 and 31 provide around 12v.

When wiring the controls, go to the operator menu by pressing the TEST button. Then select "JVS TEST" and from there select "INPUT TEST". On that screen you can test controls, which are shown on the screen in following order:

Pinout of CPS-2 and CPS-3 kick harnesses are the same as the 4 player Naomi Capcom IO! Simply plug in and play!