All the text on this page is from a magazine called Computer+Video Games (C+VG issue 150). As that issue was published in '94, I have taken out most of the bits where they talk about prices of the games and components. I think this is a good read for anyone who is just planning to buy his or her first game but does not know where to begin. The article contains many factual errors, but I have tried to correct them as well as I can - my own text is insterted in italic typeface.

OWN YOUR OWN ARCADE 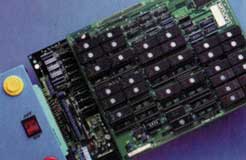 Jamma boards plug straight into the Supergun, which in turn connects to a normal TV or monitor. They aren't always well designed, though, this one for instance needs something shoved underneath the board to support it. 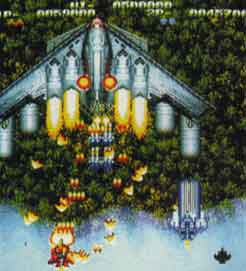 The bulk of older JAMMA boards are shoot'-em-ups, with classics such as Xevious (Xevious is not a JAMMA board!) and Slapfight (it's not JAMMA either but it's Japanese version Alcon is) still around. While these games aren't technically advanced, they're still better than any of the home computer or console versions. 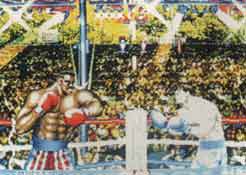 The Supergun contains very little hardware as the JAMMA boards contain their own custom chip sets. 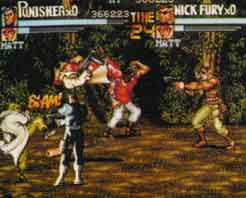 Nearly all Superguns require SCART TVs or monitors. It's a little restricting, but it gives a better picture. 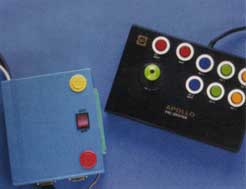 Almost any type of joystick can be connected to a Supergun, providing it's had its connection modified. We recommend a six-button stick as you'll invariably want to get hold of a copy of Streetfighter II. 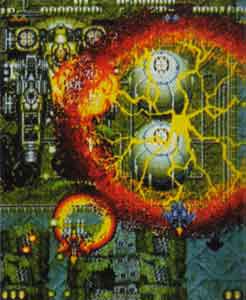 While Superguns are great for standard coin-ops, they can't handle the new generation of 32-bit games, such as Sega's Virtua series (yes they can, as long as the board has a JAMMA connector). 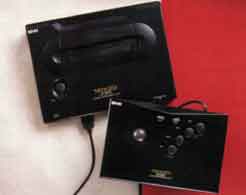 The Neo Geo is arguably the simplest way to access certain games such as Fatal Fury 2 and Samurai Showdown. 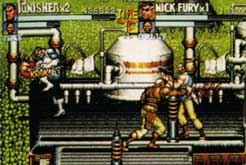 The Punisher is one in a long line of beat-'em-ups which are playable, but weren't particulary successful. As such you can pick up this, and many games like it for a lot less money than youd have to shell out for a new game.

There's almost no such thing as a perfect coin-op conversion, but why bother with imitations when owning the original might be cheaper than you think...

It wasn't all that long ago that 10p would get you a go on the very latest coin-op, altough nowadays you can pay anything up to £3 to be up-ended in the latest arcade hydraulic monster. Because new, cash-guzzling games are coming out all the time, older titles tend to be relegated to stockrooms or even the rubbish tip. It's now possible therefore to pick up older games for under half the price of a MegaDrive or SNES cartridge!

The key to coin-ops being to cheap is the PCBs that the games come on, called JAMMA boards. It's the standard agreed on by the Japanese Amusement Manufacturer Association which means all coin-op games are manufactured to the same hardware specifications. Basically they're like massive cartridges which plug straight into a coin-op cabinet, so machines can be updated without the whole thing having to be replaced. Unlike cartridges, JAMMA boards are compatible with almost any coin-op cabinet, (they are only compatible with JAMMA cabinets) so you're set up for arcade action with just one system.

JAMMA boards are actually relatively cheap to manufacture, what in fact you're paying for most of the time is the popularity of the game which is judged by the amount of money it takes in the arcades. The newer it is, the more you can expect to pay for it (more like the more famous, the more expensive - the age does not matter unless it's only couple of years old). While games like Super Streetfighter will set you back a small fortune, older 'classics' such as Kung Fu Master (which is not a JAMMA compatible board) and Rastan Saga click in at a far more sensible £20. However, there's a cautionary note to remember when you're bargain hunting. Most older boards have been sitting in storage gathering dust since they were replaced, which isn't very good for them. So wherever possible try to see the game running before you part with your money or make sure you can exchange it if it does turn out to be faulty.

You won't have access to every games that you find in your local arcade though, several newer games such as Virtua Racing are dedicated machines and they are built specifically for the one game. However, there's a vast library of games out there, including many all-time classics. Remember to check that the game you're after doesn't require a special joystick (such as Ikari Warriors) or a vertical monitor (like Super Contra) (get yourself a JAMMA cabinet with rotatable monitor and you don't have to worry about different types of screens).

So where do you start if you want to turn your bedroom into a pulpitating pleasuredome of arcade gaming? The first thing to do is to pick up a cabinet. This is the biggest outlay which, depending on how flash you want to be, will set you back between £150 and £1,000.

The size of the monitor and its housing are what pushes the price up. Cheaper units, such as the Brent 100 cabinets, come with 20-inch monitors and little else, while top-of-the-range cabinets come with 28-inch high-definition screens and excellent stereo speakers. Because the (JAMMA) cabinets all conform to the same hardware standards, you shouldn't worry about compatibility, although some boards may need upgrading (they probably mean installation of more buttons with that "upgrading").

Your best bet for a cheap cabinet is to go second-hand. These are normally older cabinets which come dressed up with logos and instructions for whatever game's inside. It won't be pristeen, but you'll usually get a better quality system for your cash. Don't worry about secondhand machines being unreliable though, the only thing that tends to go wrong is the coin-slot mechanism, and as you'll have the machine on free-play anyway, you'll never need to use it (joysticks and buttons may need a replacement, also). There are plenty of bargains to be had.

While owning your own arcade cabinet is close to being the ultimate gamesplayer's status symbol, you've got to bear a few facts in mind. First, they're pretty big. You might have trouble getting a larget cabinet through your door without taking it to bits first (most, if not all, JAMMA cabinets have been designed to fit trough a standard door). Secondly, they weigh a fair bit, and unless you've got a sympathetic family willing to lend a hand, you'll never get it up the stairs.

The cheaper, space-saving alternative to having a coin-op cabinet is the Supergun. Despite its threatening name, the Supergun is actually an innocuous looking box which lets you run JAMMAs straight through your television. While it doesn't quite have the same feel and kudos of a full cabinet, the cash you save means you can spend more on building a collection of games.

The third alternative is the Neo Geo. If you're not familiar with the system, it was the first super-console, with far more power than the SNES and Mega Drive put together (actually it is not that powerfull, the games are just cleverly programmed). Manufactured by coin-op giants SNK, the actual console contained minimal hardware. Instead the cartridges come with self-contained custom chip sets, which explains why they're so expensive (the cartridges do not contain custom chips, just lots of memory).

Altough it's been around for nearly four years there are still loads of releases, especially on import from Japan (and even now when it's nearly ten years old, NeoGeo is still going strong with new games released surprisingly often!). The advantages are that you get a flexible cartridge-based system with far more power than any (other) 16-bit games machine.

The majority of Neo Geo games are beat-'em-ups, such as Art Of Fighting and Sengoku 2, which does limit the machine's appeal. Don't be put off by the price though, many games are available secondhand for much less than the original retail price.

If you're feeling particulary adventurous, you could try building your own system. Obviously you'll need to know a (very very) little about electronics, altough after the effort of putting the thing together you'd probably wish you'd spent the extra few quid buying a second-hand cabinet.

Before you rush out and part with your readies for a Supergun, you'd better make sure that your TV has a 60Hz SCART socket, as it won't work with anything else. If your TV's under four years old chances are it will have one (all TVs nowadays have SCART sockets / update 20 years later: all CRT monitors sold in Europe have SCART sockets), but it's best to check in the manual or give the manufacturer a call just in case. The final ingredient is a joystick, preferably one with six buttons if you're planning to shell out for a version of Streetfighter II. Practically any joystick can be wired in, but we recomment you got for a six-button stick. It's also worth spending a couple of quid on PCB legs, which hook on to the boards so they're not sitting on the desktop picking up bits of fluff.